List of the 10 largest rocks in the world. The biggest rock in the world is known as Uluru or Ayers Rock, followed by Zuma Rock and Sugarloaf Mountain.

The biggest rock in the world is located in Australia and is known as Uluru or Ayers Rock, followed by Zuma Rock in Nigeria and Morro do Pão de Açúcar in Brazil. The criterion used for the inclusion of these rocks in the list of the largest rocks is the geological feature, in this case, the monolith. The monolith is a geological formation consisting of only a block of stone or rock, as if it were a mountain. In the top-10 of the largest rocks in the World , the existence of these geological formations are represented by all the continents of the World, the best known or the most sought after are the Rock of Gibraltar, El Capitan in Yosemite National Park , Sugar in Rio de Janeiro and The world’s largest monolith , Uluru.

The first rock in this ranking is located in Mexico, being the largest rock in this country, at an altitude of over 350 meters. Formed 100 million years ago, it is estimated that this rock was once three times taller. 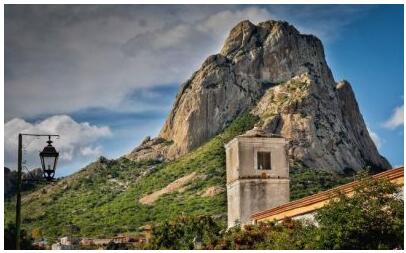 This 400-meter high rock located on the southern coast of Spain is the main highlight of Gibraltar, a British overseas territory and has been the subject of disputes between Spain and Great Britain.

Located in Yosemite National Park , the El Capitan monolith is one of the most demanding and sought after challenges for climbers. It is 910 meters high.

They are a set of three towers that are granite monoliths shaped by the force of glacial ice located in the Park of the same name, in Chile.

The largest rock in the United States of America is about 386 meters high and is an ancient core of a volcano exposed to erosion.

The biggest rock in Asia is located in Sri Lanka and, like Devils Tower, it is an ancient core of a volcano, being one of the biggest tourist attractions in the country.

Uluru or Ayers Rock is the largest rock and monolith in the world and is one of the best known natural icons in Australia and the world. The rock can change color depending on the time of day.