Katmai National Park encompasses almost 18,800 km² of untouched wilderness. It is located on the Alaska Peninsula in the southwest of the state. Pristine rivers, a rugged coast, active glaciers, volcanoes and wide, green valleys carved by glaciers characterize the landscape. The national park includes the Alagnak Wild River and the Aniakchak National Monument and Preserve, a 78 km² volcanic crater as well as the ‘Brooks River National Historic Landmark’ with the highest concentration of prehistoric human dwellings in all of North America.

“The Valley of Ten Thousand Smokes” owes its existence to an eruption of the Novarupta volcano in 1912. At that time, an area of ​​104 km² was covered with a layer of ash up to 214 meters thick. Heated groundwater escaped through cracks in the form of gases and steam. This phenomenon gave the valley the name “Valley of Ten Thousand Pillars of Smoke”. Today there are 14 active volcanoes and 19 seismographic stations of the “Alaska Volcano Observatory” institution within the protected area.

In the vastness of the national park there are almost unlimited opportunities for rafting, hiking and camping. A special attraction are the brown bears, of which more than 2,000 live here and which can be observed up close in the Brooks Camp area, especially when the salmon are migrating. Excellent bear viewing is also available on the Katmai coast, where many bears roam foraging.

The national park administration is based in King Salmon, which is served by regular flights. Brooks Camp, which has a lodge and campground, is about 50km from here and can only be reached by boat or seaplane. Bear viewing tours, both to Brooks Camp and to the Katmai coast, are also available from Anchorage, Homer and Kodiak.

Location and Size
According to travelationary, Katmai National Park is located on the Alaska Peninsula in Southwest Alaska near Kodiak Island. The National Park covers an area of ​​18,800 km².

by air
Most destinations in Katmai National Park & ​​Preserve can only be reached directly by chartered aircraft from Anchorage, King Salmon, Homer, Iliamna, Kodiak or Soldotna. Regular commercial flights to King Salmon (AKN), which serves as the National Park Service (NPS) administrative headquarters and departure point for most Katmai adventures, are available from Ted Stevens Anchorage International Airport (ANC) with PenAir and Alaska Airlines.

by Boat
Boats can access the Katmai Coast from villages and towns along the Pacific Coast. Brooks Camp and other locations along the Naknek River can be reached by motorboat from the villages of Naknek and King Salmon.

Opening times
The park is open all year round. At Brooks Camp, National Park Service services are offered June 1 through September 17. The peak months for bear viewing at Brooks Camp are July and September, although some bears are always in the area between late May and December. Bear watching is possible in the coastal areas from June to August.

Admission Fees
Admission to Katmai National Park is free. Fees are charged for camping at Brooks Camp and for commercial filming and photography.

Services
At Brooks Camp, meals can be purchased in a cabin from June 1st to September 17th. A small selection of different items is also available in the lodge shop.

Climate
The weather in Katmai National Park can vary greatly in the course of a single day: from heavy rain to cold winds to warm sunshine. Summer temperatures range between 9°C and 27°C. Strong winds are possible at any time. Visitors to the park should be prepared for all types of weather. Summers are cool in Katmai with frequent strong winds and rain. It should be noted that most of the rivers in Katmai rise rapidly after heavy rains and are extremely dangerous to cross. Since insects can be very annoying here, you should definitely apply a (local) insect repellent.
Winter in Katmai means cold, tranquil beauty: temperatures range from -40°C to +4°C. Snowfall or rain is possible at any time. The water bodies are frozen and covered with snow, the high elevations are covered with snow until spring.

Clothing
The general rule for optimal clothing in Alaska is “onion principle”. That means you wear a first layer directly on your body (avoid cotton if possible), a second warming layer (e.g. a fleece jacket or similar) and a jacket as a third layer that protects against wind and rain. When the temperature changes, you can easily put on or take off a layer.

Bear Watching
Katmai is one of the premier brown bear viewing areas in the world. A survey showed that the population is more than 2,000 brown bears. At Brooks Camp, the park’s most visited area, brown bears gather to catch sockeye salmon along the Brooks River. Viewing platforms along the river allow visitors to watch the bears without disturbing them or affecting their behavior.
Outside of Brooks Camp, areas along the Katmai Coast also offer bear viewing opportunities. On the coast, Hallo Bay and Geographic Harbor are two popular areas. Bears can also be seen in Moraine Creek and Funnel Creek. Basic Rule: Bears will frequent different areas at different times depending on the availability of food.

Fishing
Before Katmai was known for bear watching, most visitors to the park came to fish. Rainbow trout and grayling are found in many lakes and rivers. Seasonally, large schools of salmon migrate through certain areas of the park, including both sockeye and coho.

Canoeing and Kayaking
The Savonoski Loop is a popular canoeing and kayaking route in the park. Many visitors begin and end the loop at Brooks Camp. One cabin open to the public, Fure’s Cabin, is available at the start of the Portage Trail between Naknek Lake and Lake Grosvenor. For Fure’s Cabin reservations and availability, contact the park office at 907-246-3305.

Hiking
There are few marked hiking trails in Katmai National Park, but the park offers thousands of square kilometers of wilderness to explore. The area around Brooks Camp offers opportunities for day hikes. The most popular backpacking destination is the Valley of Ten Thousand Smokes.

Valley of Ten Thousand Smokes Tour
On June 6, 1912, a previously unknown volcanic vent (Novarupta) erupted, leading to the largest volcanic eruption of the 20th century. The lush green Ukak river valley was buried under hundreds of meters of glowing ash at temperatures of up to 1,100°C. The water buried beneath the mountain of ash overheated and worked its way to the surface through the ash. These discharges of steam escaped from thousands of cracks and crevices that gave the valley its name. The valley floor has cooled since the eruption and the smoke has disappeared. Besides its beauty, the size of the eruption and the collapse of the mountain make the valley interesting. The “Valley of Ten Thousand Smokes” can be explored on the daily bus ride and guided hike.

Bear Watching with Bald Mountain Air Service
After a seaplane flight from Homer over the Cook Inlet and some of the most breathtaking scenery on earth, you land in the pristine wilderness of Katmai National Park. This is where the wild Alaskan adventure begins. With the bush pilot you hike through the spectacular landscape and observe the Alaskan brown bears up close and in the wild. 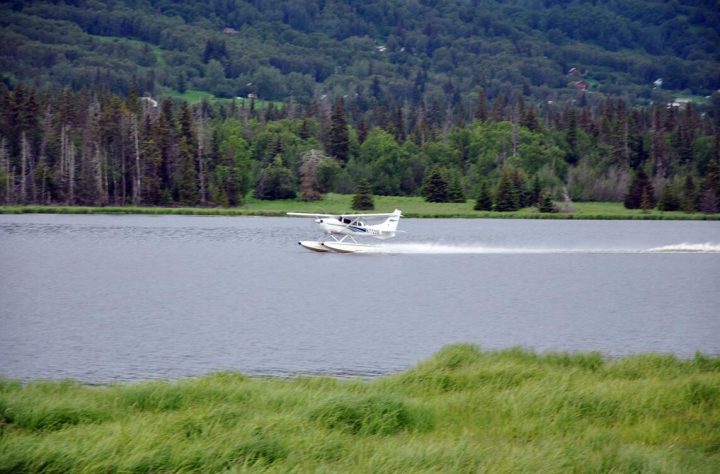