First of all, the most important thing: YES! – Dare to move into the big wide world for a few months! Even if you have a few doubts, just do it, it’s worth it!

In the course of the application it became clear that the SMU unfortunately only allows international students to take part in a few master’s programs. My planned master’s degree in economics was not there, but there were also economics courses as part of the business administration program, so the feared problem had already been resolved. I then discussed together with the professors at my home university, which of the courses offered in Halifax I myself count could be, and my course selection sent to Leah (SMU’s contact person for master’s students). The whole course-choosing process really took forever and I had to write to Leah several times, but at some point I was activated for my chosen courses. Not all of the courses offered in the Academic Calendar actually come about (at the end of the day I was registered for four of the eight courses I wanted, so plan plenty of leeway), but you don’t have to worry that you won’t be able to join any course because it might is already full until you are unlocked (as is the case with some bachelor courses).

In the first week on site, I canceled a course because I only wanted to do three courses anyway (you have to pay for each course at the university). What remains is then supply chain management, managerial economics and organizational behavior. Supply chain was so-so, we had lectures every two weeks on Wednesday evenings from 5:30 p.m. to 8:15 p.m., which were pretty boring (the professor actually only read the slides that had been uploaded). Between the lectures you always had to read three to four chapters from a book and take an online quiz and prepare a few questions for the next lecture. But there was no final exam for this. There were also two large group projects, a case study from the book and an analysis by a local company. Overall, the greatest effort of the three courses, but also the best final grade.

Managerial Economics was a course as we know it from Germany, twice a week pure lectures (10-11:15 a.m.), intermediate and final exams. Plus three assignments in small groups that you could work on at home. Those who like economics will also like this course. I already had the topics in my Bachelor’s degree and with little effort I got a top grade in the end.

Organizational Behavior was the course I had to get used to the most. To the professor: you hate him or you love him. I don’t think there’s anything in between. Fortunately, I thought it was really good! He had a very special personality, his own sense of humor, expected a lot and was incredibly direct. Anyone who can cope with this will definitely have something to laugh about in the course! There were two lectures a week (2.30pm-3.45pm) and a case study to be prepared for each week. The case was discussed in one lecture (I didn’t know anything from my university) and in the other a group presented a topic that had to do with the case. We then wrote two quizzes in which the presis were asked (actually blunt memorization), but no final exam. All in all, I only had a single exam at the end of the semester and during the lectures on three days at university. So plenty of time for homework and social contacts. Speaking of contacts: I didn’t have much contact with the people from my courses, but I did. Check act-test-centers to see more reviews from current students.

In a nutshell: save it! Those who prefer to travel beforehand should do so. This makes better use of the time. I flew over at the beginning of Welcome Week because I was hoping to get to know other students, especially Canadians. But puff cake! The internationals had their own introductory week! Top: Free Food! That was really nice at the beginning because you might not have known where to go shopping or where you first had to look for accommodation. The trip to Peggy’s Cove is also recommended, because otherwise you can’t get there without a car. Flop: the rest! Really in the city, secret party, information events … I have to honestly say that I would have preferred to travel around during the week, especially because the weather was super nice!

And one more big minus: In the first week of the lecture, the few Germans from us who were there for the Master’s degree learned that the Master’s students had their own introductory events. Leah did not think it necessary to invite us (her words). The problem with the matter was (for me) that the other first-year masters and professors had already got to know each other and you were a bit “new” in the first lecture and it was therefore difficult to get along with the others to get in touch.

I had read everywhere that it was sufficient to find a place to stay on site, but I didn’t have the nerve for it. So I organized a flat share beforehand via kijiji (just searching on a search engine is similar to eBay classified ads). The others from our group found accommodation in Halifax without any problems 🙂 I lived in a house with three other Canadians and that was the best thing that could have happened to me for me.It wasn’t close to the university (half an hour from door to door including a bus ride and a few meters in the fresh air), but with three days of university per week that wasn’t a problem. I got to know a lot of people from Halifax and without my roommates the time wouldn’t have been half as good! So if you don’t necessarily have to sleep up to five minutes before the start of the lecture period (that wasn’t a problem because my earliest course started at 10 a.m.), you should look a little further north for rooms.

Yes Canada is expensive BUT it’s worth it! Compared to the USA, it is still a bit cheaper, but the cost of living is much higher than in Germany. I noticed that especially with the food. The healthier the product and the smaller the amount, the more expensive it is. (Not to mention alcohol!) However, you can come to terms with it: On Tuesdays, for example, in the large supermarkets there was always 10% for students and now and then you could shop tax-free. As a full-time student (i.e. with at least three courses taken) you had free access to the fitness center including sauna, steam bath, various fitness courses and towels. So you could create a good balance to one or the other fast food meal ;-)There’s always something going on somewhere in the evening. Halifax has an incredible number of bars with special offers, live music or karaoke. There are fewer clubs, but the dance floor hasn’t stopped either! In addition, my coffee consumption has increased tremendously in Halifax! There are at least as many cafes as there are bars and when the weather is nice I recommend a hot drink to take away and a walk on the waterfront to everyone. The waterfront is generally a nice corner with delicious ice cream, small souvenir shops and the ferry to Dartmouth (you can use it for free with the bus pass). It is definitely worth exploring the surrounding area (Chester, Mahone Bay, Lunenburg) with a few people and a rental car and going to Cape Breton for a weekend.

I can recommend Halifax to anyone who is not expecting a big city like Hamburg or Berlin and has no problem with it if the bus doesn’t come or if it pours for three days in a row (you couldn’t really call that rain anymore). The first weeks were great summer weather (don’t forget your shorts), the rest of the time not much different than in Germany. Unfortunately, the great white winter didn’t come until I got home again. But the people there are just unbelievably friendly, open-minded and helpful (bus drivers even wait there if you are scurrying a block away to the bus stop) and comfort you with any hint of homesickness! 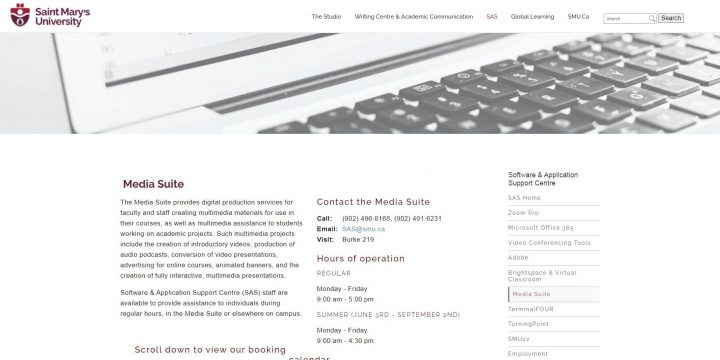