In an international comparison, Canada’s education system is at the highest level. The universities are among the best in the world and are globally recognized. In addition, Canadian universities have extensive experience with international students. Although tuition fees are also relatively high in Canada, they do not reach the proportions of their US counterparts.

Canada also offers an enormous variety of study locations. Not only in the big metropolises there are numerous educational institutions, but also smaller, rather unknown Canadian cities can offer some excellent universities. To get a really good first overview, I can only recommend Maclean’s Guide to Canadian Universities. The magazine can now also be downloaded from the Internet for a one-time fee of $ 19.95. (http://www.macleans.ca/education/index.jsp) It introduces nearly 70 universities across Canada, each with a two-page profile. There is also a very detailed ranking of the universities. But other important information is also given, such as which notes are required for a recording,

A visa was necessary for me because you only need one in Canada for a stay of more than 6 months. Very detailed information on how to otherwise apply for a visa for Canada can be found on the website of the Canadian embassy in Germany at: http://www.dfait-maeci.gc.ca/canada-europa/germany/visa-study-de .asp.

You should make sure that you do not give up more than 2 x 23 kilograms, because otherwise it will be the same as me that you have to pay a mere $ 100 for excess baggage. (As of summer 2007 – maximum weight limits can of course change at any time and are certainly different from airline to airline. My tip: inform yourself in good time and then weigh your luggage at home. Having to repack at the airport is really not nice.)

Health insurance is an integral part of the DAAD scholarship, so that no further international insurance has to be taken out.

Exchanging great cash in advance is completely unnecessary. (Except maybe a few dollars for a small snack at the airport) It is advisable to have a credit card because you can use it to pay almost anywhere in Canada – just like in the USA. Most credit card companies charge 1.5% of the purchase price for each purchase made for using the card abroad. On the other hand, the credit card is the most convenient and uncomplicated means of payment.
In addition to the credit card, it is also advisable to have an EC card, with which you cannot pay in the shop, but can withdraw cash at the ATM at any time. Here you should make sure that you have a card from an internationally operating financial institution (such as the Deutsche Bank), because you can then withdraw your cash free of charge at certain partner institutions in Canada. (Partner of Deutsche Bank in Canada is Nova Scotia Bank, which you can find everywhere not only in the state of Nova Scotia, but also in major metropolises such as Toronto or Montral.)

Saint Mary’s University was founded as a purely Catholic university by an Irish vicar as early as 1802, making it one of the few Canadian universities that can look back on more than two centuries of history. Today the SMU is a state university with around 8,000 full-time students. She has a good reputation in Canada for the high academic quality of her teaching, as well as for her small classes and a learning environment that emphasizes interactive and hands-on learning.

Internationality also traditionally plays a major role at the SMU, which is reflected, among other things, in the high number of international students (Asians in particular) on campus. Due to the abovementioned reduced teaching activity at Canadian universities during the summer, unfortunately there weren’t as many Canadian students on site during my stay as is otherwise usual in the other semesters. Because there were no major sporting highlights at the university, the student flair of a large North American university was unfortunately lost a bit. Check jibin123 to see more reviews from current students.

Brief description of the events attended

In the “Financial Accounting Analysis” lecture, the form and content of the balance sheet and profit and loss account were examined and the skills required to correctly interpret and interpret such information were taught. The following topics were also dealt with:

By and large, the lessons were designed in such a way that there were 2 lectures of approx. 3 hours each, in which the professor explained various areas of financial accounting using specific examples and sketched them on the blackboard. In addition, the students had to acquire knowledge on the topics from a book themselves and answer questions on this. These so-called “assignments” were collected and assessed by the professor and were part of the final grade. In addition, a test was written every other week. At the end of the semester there was a three-hour “final exam”.

Brief assessment: I liked this course a lot.

As the name of the lecture suggests, this course was primarily about training and improving communication and presentation skills. In the first 1-2 weeks, the professor gave general tips and recommendations, after which the individual sessions were only designed by the students themselves. Every week there was a given topic on which each student had to prepare a lecture. The topics included persuasive speech, selling a product, etc. The presentations always lasted between 10-20 minutes. For self-assessment you were filmed during your own presentation. In addition, the time was stopped and the number of filler words was counted. After each presentation, there was always detailed feedback from the professor but also from the other fellow students.

Brief assessment: I liked this course a lot.

The focus of this course was primarily on sales activities (sales techniques, employee motivation, assessment of the success of salespeople, etc.) and so-called “relationship selling”, i.e. the development of long-term relationships with customers. In order to make the lessons livelier, more interesting and more varied, a chapter from the text book accompanying the lecture was presented to the group by a small group of students every week. Role plays, group discussions and case study analysis rounded off the course.

Brief assessment: I didn’t like this course, but that was mainly due to the professor.

The “Strategic Management” course is a business course that basically takes up all the knowledge that was acquired during the course and tries to bundle it in order to enable a view of the “big picture”. While most other courses focus on a specific subject area (production, marketing, finance, accounting, etc.), pretty much all areas need to be considered when formulating and implementing strategies. The students should prove that they can now apply what they have learned to specific case studies. In addition, the students should learn to differentiate between what a company would like to do, what it is capable of and what the general economic conditions allow.

Brief assessment: I liked this course very much.

In general, it can be said about the level that the courses require a lot of work. Precisely because as a student you have to work out a lot yourself using literature outside of the actual lectures, there is often little time left for leisure activities.

On the campus of St. Mary’s University there are several student dormitories, which are also directly connected to the actual university complex via (underground) corridors, so that when it rains you don’t even get wet when you have to go to the lecture; – ) The three large residences are called Loyola Residence, Vanier Residence and Rice Residence. I stayed at the Rice Residence for 3.5 months of my stay in Halifax. I shared a so-called senior apartment there with a Canadian and then with another German. An apartment consists of two separate rooms, a kitchen-living room and a bathroom.
When I first arrived, I was a bit shocked when I entered my apartment for the first time, because the rooms are very spartan. There was nothing there but a bed, a table, and a chair. There wasn’t even a real wardrobe. But after 1-2 days you get used to it. At $ 550 per month, the rent is relatively steep for this standard. However, you would certainly pay a lot more for an apartment that you are looking for yourself in the city.
It is also very pleasant that you can wash and dry your laundry in the dormitory for little money.

Despite the approximately 370,000 people who live in Halifax, I found the city to be a rather small, rather manageable city. This may also be due to the fact that the districts of Dartmouth, Bedford and Sackville are no longer really perceived as part of Halifax because they are partly on the other side of the bay and can only be reached by car, bus or ferry. Downtown Halifax actually only consists of two streets, Spring Garden Road and Lower Water Front / Barrington Street. If you don’t like that “small town feeling”, you should consider going to Toronto, Montreal or Vancouver.

If you want to travel from Halifax, e.g. planning a trip to Toronto or Niagara Falls, you should definitely visit the travel agency on campus (ground floor Student Center) or alternatively at Dalhousie University. Here you can get relatively cheap flights or you can book complete offers that will definitely pay off. 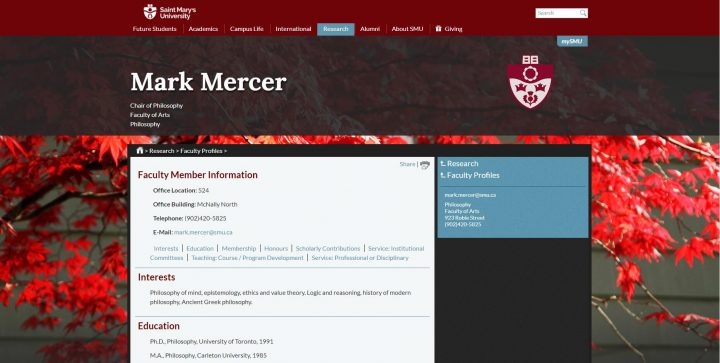