Like any North American university , the SMU also has a residence where students can live. However, mostly only the freshmen (Canadian for freshmen) live here and the rent for the rooms is very high. Since undergraduate students are not allowed to apply for the 1-room apartments, they are dependent on the university’s meal plan.

So I quickly decided to live off-campus. The room search I already started in January. However unsuccessful at first. After four months in Canada, I can say that Canadians are pretty relaxed about renting out their rooms and usually post the offers on the popular Internet platforms a week before they actually move in. One of these is kijiji.ca, a kind of eBay classifieds ad. In June I found a small room in a shared apartment with two Canadian students.

Halifax is a big city by Canadian standards. There are numerous restaurants, bars and clubs . A little tip : on Tuesdays, entry to the cinema costs only half and many museums are free for students. We recommend the Pier 21 museum, one of the largest museums on Canadian immigration history. There are also numerous festivals including an Oktoberfest. I particularly remember the promenade by the sea and Point Pleasant Park. Here you could quickly forget the stress of the university.

As you imagine a supermarket in North America, it actually is. It’s hard to find small packs. A tip for everyone who wants to save on shopping: Go to the Atlantic Superstore every Tuesday, there is a 10% discount for students.

Everyday life at the university

It was in Canada that I first came to appreciate German student life. I was used to taking only one exam, such as final exams or term papers. In Canada it looks very different. From the beginning of October to the end of December, I had at least one written exam or one submission for an essay every week. Of course, these do not have the scope of German homework, but they are still time-consuming. What I found positive was that participation in class was included in the final grade with 10 percent. Since the semester abroad is an integral part of my course, I wanted to achieve 30 ECTS points here. So I took three courses at Saint Mary’s Universityá 3 credit points. In Canada either 3 credit points courses (for one term) or 6 credit points courses (over a whole year) are offered.

The reading effort was very high. We had to read four books in total, for which there were midterms. Still, I found this course very interesting.

The class sizes were different . There were over 50 students in my law course, around thirty in Global Political Economy and only eight of us on the Crisis of Democratic Legitimacy course. The lectures took place twice a week for 1:15 am. For each course you had to buy at least one book before beginning, as the lectures require that you have read the respective chapter beforehand.

I find it very enriching to get to know other perspectives and perspectives on political issues . The refugee situation in Europe was also discussed in the courses.

The parliamentary elections, which took place in October 2015, were a highlight. A lecture on election campaign strategies was given at the SMU. The focus here was on online campaigning, as this has been gaining more and more importance since 2008. In Halifax there was a forum where the top candidates of the parties ask questions from the citizens. I found this very interesting. Furthermore, many creative ideas could be seen on the street, as pointed out to the elections. Check liuxers to see more reviews from current students.

In addition to a student bar (The Groosebrook), the SMU also has a very large fitness studio, sports halls, a football field and an ice hockey arena . Sport is very important in Canada. I took the spinning and Zumba classes. Of course, a visit to the football game at their own university was also a must. Free fanatics were given out before the game. Unfortunately, the university team lost, but it was still worth an experience.

I went on weekend road trips with friends in September and October and saw so much of Nova Scotia. On Fall Break (4 days in November) I flew to Montreal and Toronto. Both cities are worth a visit. While Montreal is very European / French, Toronto is a typical North American big city.

Together with other exchange students, I organized a Thanksgiving dinner. Thanksgiving is not in November like in the USA , but in October for Catholic Thanksgiving. Another event was of course Halloween, when all of Halifax was decorated in a creepy way and numerous parties took place.

In the last four months I got to know many new perspectives , made new friends and gained experiences, both positive and negative. I don’t want to miss any of this.

I see the semester abroad as a unique opportunity to immerse yourself completely or partially in a different society for a certain period of time and to gain experience that you would otherwise not be able to gain. I advise everyone to take the opportunity who is enthusiastic about other countries and cultures. And if you would like to study by the sea in “wild Canada”, Saint Mary’s University is the right place for you . 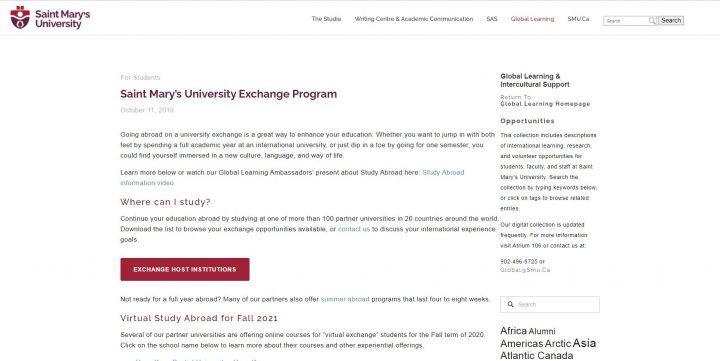